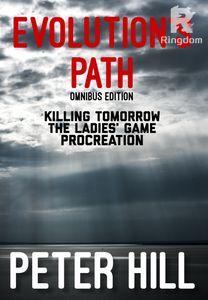 The complete series in one omnibus edition.

This trilogy takes place in the near future, it isn’t science fiction, it’s ‘faction’, and all the more chilling because you won’t find zombies here, or people suddenly endowed with super powers, just a cast of realistic characters struggling with the challenging events that overtake their lives.

Against a background of terrorist plots, political intrigue and espionage, the lives of three powerful women become inextricably entwined.Fleur Nichols, an investigative journalist, Wenna Cavendish, a senior MI5 officer and Simone Gofre, a brilliant virologist, leave their marks on world events and a stunning revelation will change the course of human history forever.Evolution’s Path is a frightening look at the mechanics of an all-too-possible societal collapse and its aftermath.

It really could happen and this is how.

‘A gripping scenario. Well written and character driven … a credit to a master story teller.’

‘The multiple themes of this thriller suggest its title: population control, germ warfare, investigative journalism, corporate greed, terrorism. It was a well-paced read with the tension and conspiracy to keep you engaged.’

‘He very deftly links all aspects and the final chapter is chilling in its possibilities.’

‘Compulsive reading. I was gripped by this story from the beginning. Hill is a talented writer who has the ability to create a completely believable and terrifying future scenario.’

‘…this well-written book with its intriguingly woven plot…It seemed impossible that this cast of fascinating characters and their stories would all tie up neatly at the end, but they did, dramatically, and very satisfactorily.’

‘Author Peter Hill is a visionary storyteller. He does it with razor-sharp prose, and he isn't afraid to tackle ambitious themes here: feminism, globalisation, environmentalism.

…a story so chilling in its realism, you won't soon forget it even after turning the last page. It’s a dystopian narrative that sears itself into your mind.’

‘It has plenty of intrigue, fast paced action with the plot closely mirroring many of the contemporary issues being faced around the world today. It draws you further into the world of terror and espionage and the potential for dire consequences.’

‘Fleur Nichols, the strong-headed journalist, is on the run, pursued by ruthless enemies even as the world around her falls apart in an escalating viral pandemic…

Once again, themes of feminism, globalisation, environmentalism take centre stage as Fleur fights not only to survive a tumultuous apocalypse, but to separate lies from truth. At stake is the fate of humanity, and Fleur's unborn child may hold the key.’

‘The epic conclusion to blistering trilogy.

It's bold. It's scintillating. It's the brilliant culmination of everything that's come before.

Now that a viral pandemic has all but decimated the male gender worldwide, it's the women who have ascended to political supremacy. The social order, as we know it, has been upended.

But all this just sets the stage for another catastrophic confrontation.

This is a techno-thriller completely unlike anything I've ever read. It's controversial. It's provocative. It's uncompromising.

If you're a looking for a post-apocalyptic story written with both emotional sensitivity and propulsive excitement, this is it. It's Tom Clancy meets Margaret Atwood

Read the whole EVOLUTION'S PATH trilogy. I can't recommend this enough. It really is something else.’

And beyond the immediate siege with its vast deployment of police resources there are frenzied repercussions in the corridors of Whitehall and the Kremlin.

The violent and unforeseen climax tests all of Dice’s and the hostages’ courage and moral strength.