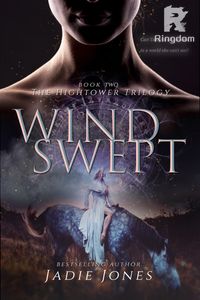 Tanzy's journey continues in Windswept, the second tallment of the Hightower Trilogy...

An Unseen World believes Tanzy Hightower is the key in an ancient prophecy meant to deliver the only new birth in all of time. They have waited a thousand years for her soul to return to life in human form. Some of them will stop at nothing to fulfill the prophecy, and others have sworn an oath to end Tanzy’s existence, permanently.

Tanzy’s body is compromised. Her ve are now home to the blood of a savage, wild horse, and its tincts are becoming impossible to control. Her world is also divided. She is determined to rescue Lucas, an Unseen creature who has loved her since her first life, and to find her treasured Harbor and the other stolen horses, which are bound for a catastrophic end in a world she can’t access on her own. Yet the only allies she has left ist she seeks refuge in a remote safe house on the Outer Banks.

While her fellow candidates beg her to stay in hiding, new enemies work to draw her out, making it clear Lucas and the horses are hers for the taking. But Tanzy knows all to well that when your loved ones are used as bait, finding them is only the beginning.