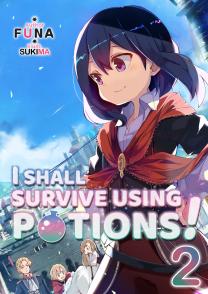 I Shall Survive Using Potions! Volume 2

After receiving the power to create any potion she wants, Kaoru is sent off to live her new life in a brand new world. Things don’t go exactly as she planned, though, and the truth comes out that she’s friends with the goddess Celestine!Though Kaoru tries to keep her head low despite this (emphasis on “tries”), she can’t help but put her potion powers to use, drawing the attention of both countries she’s already passed through. One thing leads to another, and, well, a war breaks out. With new friends up high and old friends down low, Kaoru has to use her wits to protect them and end the war... and come up with new ways to use her powers while she’s at it.It’s time for Kaoru to put her brand new schemes into action! Just hope she doesn’t read the fine print on her deal with Celes...

Hi, everyone, it’s FUNA. Thanks for picking up the next volume in the series!

...No one just skipped the first volume before buying this one, right?

We covered everything from the war against Aligot, the most action-intense part of season one of “I Shall Survive Using Potions!” to the start of Kaoru’s new journey. What’s ……