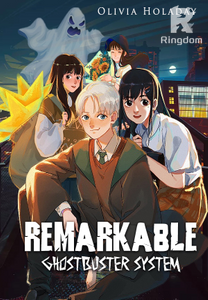 Robert Martin was an ordinary exorcist until he got the Remarkable Ghostbuster System!

Since then, his life had changed. He could earn a lot of equipment and money by killing ghosts and protect humans, such as astral vision, fiery rune and divine trument.

During his ghostbuster journey, he had also met so many beauties, the ghost lolita, the icy beauty and the sexy female teacher......

***
The gorgeous ghost pressed her full lips agat Robert. He could not believe that he was going to lose all of his energy and be killed by a female ghost.

He was an exorcist for crying out loud.

"Miss, please let me go! I will pray for your soul or how about I give you a beautiful, sexy doll?” Robert pleaded.

However, the ghost didn’t reply, she continued to kiss him all over. Robert was feeling sad, thinking about the fact she was sexually assaulting him.

Suddenly, there was a chime in his ear, “Congratulations to the host for successfully activating the Remarkable Ghostbuster System. The system will begin to merge shortly!”

“Merge successfully! The host is being invaded by Yin spirit. Activate the defense system!”

Robert was startled, and then a rune appeared in his hand. His arm raised up, and touched the female ghost’s chest. He could tell that he had touched something soft but he wasn’t sure what he was doing.

“I know you want me badly!” The ghost exclaimed and got more and more excited.

“Ghostbuster System, are you helping me or harming me?” Robert cried.

At this moment, a bright, blue lightning streak lit up the dark sky, and hit the female ghost that was on top of Robert.

The ghost screamed and turned into faint smoke before disappearing...

Damn, why was I so unlucky today? Robert felt completely desperate tonight.

He needed to deal with three women now, no, in fact, two sisters and one female ghost! He would die sooner than later!

When Robert was lost in various fancies and conjectures, he saw Adele coming towards him, lying on his bed, stretc……